I know most of you reading these Health Tips are health oriented, possibly a little overweight, some post-pregnancy and others due to Covid inactivity, nothing too serious. But if you happen to know someone who’s seriously obese, this Health Tip could change their lives. Consider finding a way to get this information to them.   […]

Anngela Leone, LAc. Is a licensed and board certified acupuncturist and herbalist in the state of Illinois. Anngela offers minimally invasive healing modalities that allow your body to heal itself. Chinese Medicine looks at each person through a broader lens where we see you as a whole person, not just a set of symptoms. As […] 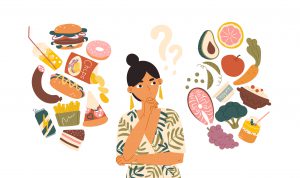 Virtually every day, a patient offers a variation of this sentence: “I’m steadily gaining weight no matter what I do. I restrict my calories to good foods, I exercise regularly, and I get zero results. My thyroid tests are normal. What’s wrong with my body?” We know the US is a nation of the overweight […]

It’s really a bummer to add weight gain to the stressors you’ve been experiencing in this difficult year of Covid-19, police brutality, and economic crashes. You’re the victim of a perfect storm: inactivity, anxiety, disrupted sleep, and eating too many of the wrong calories. I know comfort foods are comforting, but did you really need […]

Many years ago, I became exhausted dealing with a friend who ignored my advice on living a healthy lifestyle. His attitude toward exercise was similar to Oscar Wilde’s “I often take exercise. Why only yesterday I had breakfast in bed.” His attitude toward food, especially restaurant food, was that he didn’t care much about quality […]

Please note this Health Tip will not tell you how to lose weight. If you want to browse the offerings on that topic, go to amazon and search for diet books. Once our largest bookstore attempted to track the numbers, but when they surpassed 95,000 it apparently gave up and now tell us that the […]

You know who you are. You’ve been eating stable portions of pretty much the same healthy food for years and you consider yourself weight conscious. Long ago you decided that by combining smart food choices and a health club membership, you were not–definitely not–going to be one of those people who added a point or […]

Before you dismiss this Health Tip with a stifled yawn and an “Oh, sure. Just stop being a little piggy,” you should know about a study published last week in the British Medical Journal tracking the weight-gain patterns of an astonishing 124,086 men and women in the US over 24 years. In fact, if you’re […]

Many years ago, I became exhausted dealing with a friend who ignored my advice on living a healthy lifestyle. His attitude toward exercise was similar to Oscar Wilde’s “I often take exercise. Why only yesterday I had breakfast in bed.” His attitude toward food, especially restaurant food, seemed too often that he didn’t care if […]

Our patients have been having some real success with the HCG Weight Loss Program here at WholeHealth Chicago. Next week we’ve scheduled a sort of dog-and-pony presentation on HCG weight loss. If you’re interested, call and reserve a seat. If you can’t make it, don’t fret. We’ll be hosting more of these programs and in […]

Posted 08/25/2014 You must have read somewhere that every piece of research in the past few years has categorically shown the health benefits of walking or bicycling to work. If you live too far away from your workplace to make those options feasible, this Health Tip will make your day. With walking or cycling, your […]

The FDA recently approved two new weight-loss drugs and literally within hours of the drugs being officially released a pharmaceutical rep for one of the companies left his card with me and a patient called wanting a prescription. In the weeks that followed, full-page ads for the drugs began appearing in every medical journal I […]

I imagine diet books began appearing worldwide shortly after the Gutenberg Bible hit the shelves. And ever since, physicians, nutritionists, alchemists, personal trainers, and others have attempted to convince us that their diet is the one that will change everything. All diets fail for the same reason, an assertion I base on my experience both […]

Despite all the hoopla about the “best” way to determine if we’re overweight–getting on a scale, BMI, waist-to-hip ratio, pants won’t button, body fat percentage–we ultimately rely on our intuition to let us know we feel fat. In other words, if you think you’re overweight or obese you probably are. Two-thirds of Americans are one […]

Yes, I mean you. You were the one complaining about your weight, right? Yeah, I thought it was you.

The Herb ephedra, also known by its Chinese name Ma huang, has been used in Traditional Chinese Medicine since 3000 B.C. to treat colds, asthma, and other upper-respiratory disorders. An evergreen shrub, ephedra (usually Ephedra sinica) over the centuries has traditionally been dried as a whole herb and then added in very small amounts to a tea, along with other herbs, to help ease congestion. Preparations made from two other species, E. intermedia and E. equisetina, have also been used in Traditional medicine, but generally have a less potent therapeutic effect. Traditional East Asian herbal medicines containing ephedra were generally herbal combination formulas designed for specific short-term usage. These would be used in illness conditions where the action of ephedra would counteract certain types of unhealthy symptoms.

The Time Magazine article that ran last week was food for thought for people who exercise regularly. Let’s face it, many of us who work out aren’t doing so to boost mood, enhance mental skills, prevent Alzheimer’s disease, or reduce heart attack risk–all of which exercise does–but rather to lose weight.

St. John’s wort (Hypericum perforatum), a common shrub-like perennial, bears bright yellow flowers that contain numerous therapeutic substances when dried. Europeans have used the herb for centuries to calm jangled nerves and heal wounds, among other ills. And so it’s not surprising that North Americans have recently embraced its use as a treatment for depression and conditions associated with it.

Glutamine is a nonessential amino acid. “Nonessential” means that the body can create its own supply if the diet is lacking in glutamine-rich sources, such as poultry, fish, and legumes. Few people who are basically healthy and follow a balanced diet are deficient in this amino acid, one of the most abundant in the bloodstream. But there are some important exceptions.