It’s an eye-catching title, I’ll admit. But the links are quite real and further research may guide medicine in new directions of cancer prevention and treatment. It all starts in your gut microbiome, the totality of microorganisms–bacteria, viruses, protozoa, and fungi–present in your gastrointestinal (GI) tract, mouth to anus. Until recently, researchers and clinical physicians […]

She had wisely trimmed her fingernails to avoid injuring her own skin, but as she sat in my office she continuously rubbed one part of her body or another with the ball of her thumb in order to relieve the itching. Tracy was in her 20s and accompanied by her mother. Although I could see […]

Patti came to our offices with her daughter and she’d written “Everything hurts” on our patient intake form. As she rose from the waiting room chair, her face grimaced in pain. Patti was middle-aged and seriously overweight. If there’d ever been a spring in her step, it had vanished long ago. Patti said she’d been […]

Barbara was 30 and what she’d written on her WholeHealth Chicago form certainly didn’t match her appearance.  On the first line, “My hair is falling out!” And on the second, “Tired!”  Physically she looked healthy, but her face reflected a worried shadow. “I know it looks like I have a lot of hair,” she began, […]

Athlete’s foot is the name given to a common fungal infection that occurs on the feet virtually always starting between the toes then spreading over the feet. The infection is one of the group called tinea by physicians, and the full name tinea pedis, refers to a fungal infection and its location (pedis means “foot”). Other locations for tinea infection include the scalp (tinea capitis, or ringworm), the genitals (tinea cruris), the nails (tinea unguium), and the entire body (tinea corporis).

Then, one day, you realize the dermatologist’s waiting room is looking awfully familiar these days and more than likely, you’re there because the wart is back on your kid’s finger. These fleshy little growths (the wart, not the kid) are caused by the papillomavirus, of which there are thirty different types. Interestingly, all the different warts you’ve read about (common wart, plantar wart, genital wart, and so forth) are essentially the same, but their appearance changes according to their location on the body. Because the virus invasion is confined to the topmost layer of skin, it manages to elude the radar screen of the immune system. When a wart does disappear spontaneously, it probably just got ‘noticed’ and appropriately zapped. 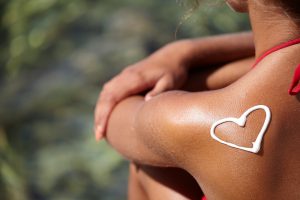 Most people have had at least one vacation ruined by sunburn. Usually, they then smarten up and remember that heading outside means putting on sunblock. Children are frequent victims of sunburn, their time in the sun flying by as sandcastles get bigger and bigger. We grown-ups can be caught unaware, too. Whether skiing, backpacking, or just sprawled on the chilly deck of a cruise ship, we just don’t notice until it’s too late how the dazzling sunlight has baked our pale arms, legs, and face into a glowing lobster red.

Since almost everyone gets chickenpox as a child, most of us are susceptible to developing shingles as adults. Each illness is caused by the same virus, which is called varicella in children and herpes zoster in adults. After the chickenpox ends, the virus goes into hibernation in the nerve cells along the spinal cord. Then, many years later, when the immune system is weakened in some way–by age, stress, certain drugs, illness (even the flu)–the virus awakens. At some point along the spine, it travels along a nerve, producing a painful rash along the band of skin served by that nerve. Herpes zoster means “belt of fire”–the name is apt.

You’re in your thirties and confident that those former anxieties about teenage acne are ancient history. Then you begin to notice something. Hmm… your cheeks…your chin…and the bridge of your nose seem to redden easily, especially when you eat some spicy food or drink alcohol. At first you think nothing of it, and don’t mind when friends comment about your “healthy glow.” But then, this odd redness just doesn’t seem to go away. When you examine your skin carefully, you see lots of tiny blood vessels. Your face appears a little swollen, and it definitely feels tender. Since the resemblance to Santa Claus is getting a bit unnerving, you decide it’s time for some help.

When I was a kid, there used to be a magazine advertisement that began “Do you suffer the heartbreak of psoriasis?” I couldn’t understand the connection between a skin rash and a broken heart until I began actually treating people with this skin condition. Psoriasis, which affects about 6 million Americans, is indeed a frustrating disorder, for both patient and doctor. Although the exact cause is unknown, we do know that new skin cells reproduce and accumulate faster than they can be sloughed off. The condition can range in severity from a few small patches to large and unsightly thick plaques that appear just about anywhere on the body.

Eczema is a skin inflammation that has symptoms of itching, scaling, and even the formation of blisters. Some forms of eczema are better known as dermatitis, such as contact dermatitis or seborrheic dermatitis. Eczema is easy to diagnose and not at all dangerous. But it’s a real challenge to treat effectively and permanently. While many cases of eczema clear up by themselves when whatever irritating substance that started the whole thing is avoided, some cases can be incredibly stubborn. They disappear only temporarily when cortisone creams are applied, then return like an unwelcome relative on your doorstep.

Are you reading this while everyone’s dinner is getting cold, your finger painfully throbbing because you reached for the wrong pan? Or is your child screaming because she didn’t know how hot a toasted marshmallow could get? First, plunge the finger into cold water.

Because their bodies are adjusting to the hormonal changes of adolescence, virtually every teenage boy and most teenage girls develop some form of acne. This may range from the common pimple (“Oh God! Another zit!”) to the large inflamed nodules of cystic acne.