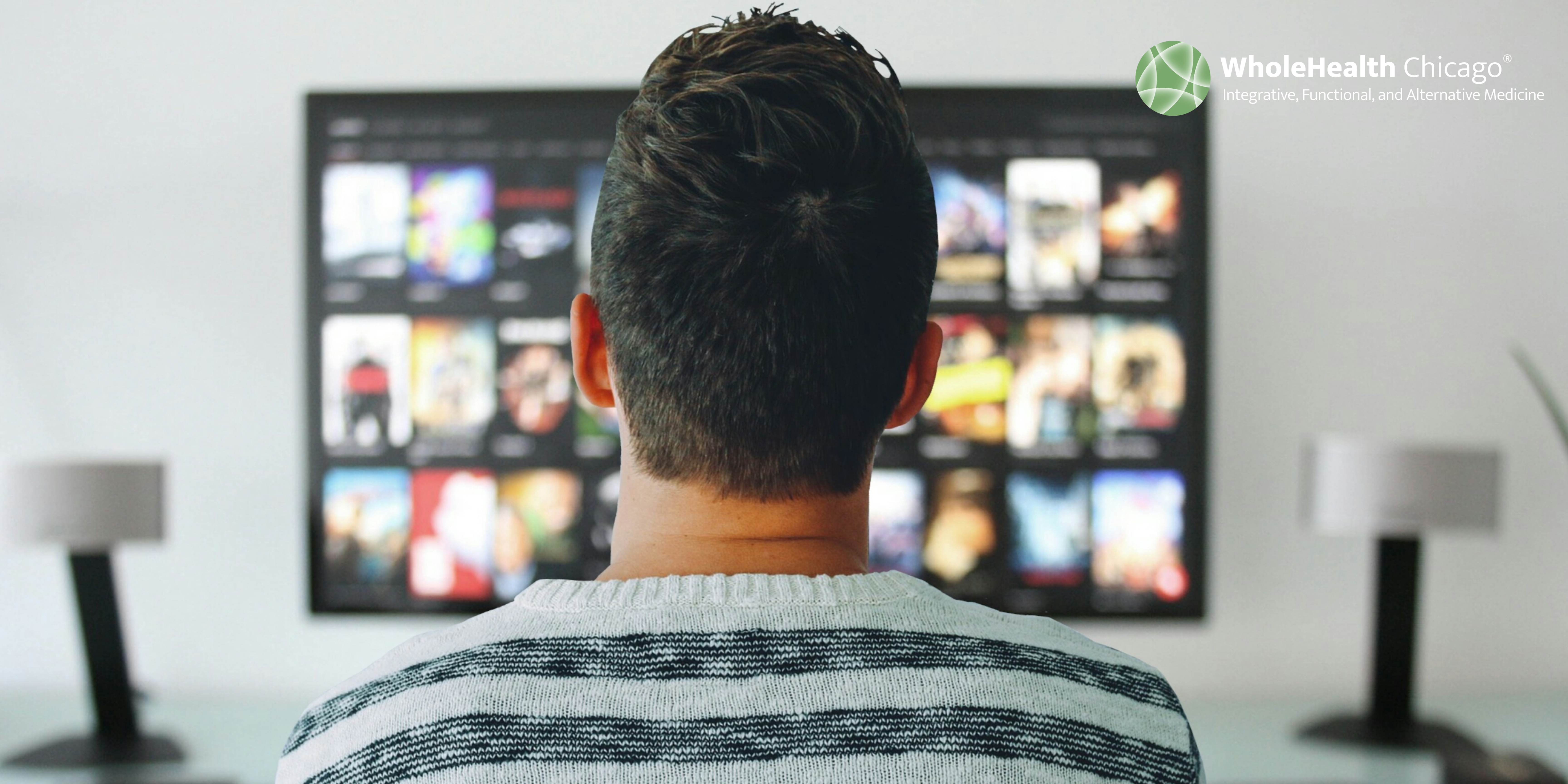 There’s some interesting data in this Health Tip based on both recent and older research concerning our screen viewing habits and their effects on both mind and body.

When I present you with a “number” like this one, “the average American watches 3.1 hours of TV every day” (in this, we’re highest in the world), you need to pause and reflect about yourself.

When I compare TV time with “screen time”, I am meaning the sum of TV plus your PC/pad/phone, which in the U.S. is 7.0 hours a day and not the highest in the world. But, realize this does mean your 3 TV hours added to all your internet-related activities: your job requirements, e-mails, social media, all that stuff. Now you might be thinking, “I sit at a computer all day long, 7-8 hours minimum, and then go home and watch some TV”. But your mail delivery person, your Uber driver, your plumber doesn’t have a job staring at a computer screen all day long.

Why Watching TV is Really an Unhealthy Activity

Not that you sitting at a computer screen for eight hours is the same as hiking through the Rockies or puffing on an elliptical, but at least with internet activities, your brain is kept busy. The villain with TV watching was ‘passive inactivity’ and in the largest study of its time, from 2000 to 2008, researchers in Australia tracked the viewing habits and health issues of over 100,000 people aged 25 and up. What they discovered (shocking at its time, but the study has since been replicated), is that watching TV six hours a day subtracted five years from life expectancy, which was the same number of years lost from smoking one pack of cigarettes a day.

Just last week, a study published by the University of Southern California showed that adults aged 60 and over who spend much of their time watching TV run a significant risk of developing dementia. However, when this same age group is “computer active”, there is actually a reduced risk of dementia. The results remained the same even after scientists accounted for levels of physical activity. Individuals who were highly physically active, but then watched a lot of TV, developed far more dementia than those who were less physically active but spent more time at their computers.

Four Arguments for the Elimination of Television

We all have a few books that are genuinely life-changing and Jerry Mander’s, “Four Arguments for the Elimination of Television”, was one of these for me. Published in 1978, it was a bestseller at the time and is in print to this day. I was a young doctor at the time but also overweight, in terrible physical shape, watched a lot of TV, and knew I was filling my brain with what Newton Minow (FCC Chairman under President Kennedy) called ‘the vast wasteland’ of TV.

Mander focused on how TV affected our bodies and minds and now 44 years after his book was published, a study from JAMA Psychiatry confirms that not only was he correct but that TV is actually more dangerous than he predicted. Let’s begin with the four original arguments for the elimination of television, whose “elimination”, Mander knew, would never occur but being an old-school Mad-Man, he simply wanted a catchy title:

When I finished Four Arguments, I virtually stopped watching TV altogether and have never returned to it. The last TV series I watched was “All in the Family”, which ended in 1979.  I’m clueless about TV references in conversation, never having seen MASH, Seinfeld, The Sopranos, The Wire, Game of Thrones–no cable programs, no Netflix, no Downton, nothing. I rent an Amazon Prime or DVD about once a week (usually something I missed at the movies), but being a movie fan I like the experience of being at the theatre itself.

There is no intellectual snobbery involved here. It’s more of a phobia, probably related to body dysmorphic disorder. I don’t ever want to be that fat kid again.

Now every time you think about chilling in front of the TV for a couple of hours with a brew and some chips, pause for a moment and picture yourself a few years down the road. Fat, breathless, struggling to find the remote, and wearing Velcro slippers because you get too confused tying your shoes.

Whenever you and a friend think about ‘binge-watching’ an entire TV series, just pause and think about the concept of ‘binge’ anything, like ‘binge drinking’ or ‘binge eating’. In writing these Health Tips, I do quite a bit of background research and I must admit, I am rarely shocked (like the one about TV and dementia).

On the other hand, this link to the reliable Britannica on binge-watching did sort of surprise me: https://www.procon.org/headlines/binge-watching-top-3-pros-and-cons/

6 thoughts on “The Statistically Proven Dangers of Television Watching”

but Doc, game of thrones was life changing! …sort of.

I am losing my vision and cannot see the television screen but I do listen to news programs, using TV like radio. Does it make any difference that I am not looking at the screen?I “listen ” to the news probably 2 hours a day, more if there is a developing news story

I am sorry to hear about the challenges with your vision. Stay active as much as possible and listening should be fine.

Yeah and? The same points apply for books, should we not read books then?

Quite the contrary- read away!